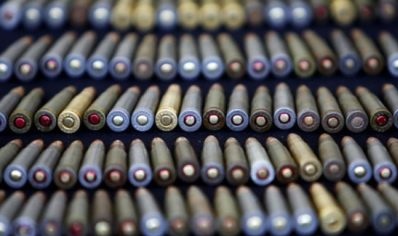 Let’s go ahead and put this out there: microstamping doesn’t work on the practical level as a way of identifying shell casings consistently, requires manufacturing technology that doesn’t exist in a commercial form, makes firearms using the technology more prone to case failure and shooter injury, is so delicate that it is negated through simple use or several passes with a file or common part replacement taking minutes, doesn’t prevent crime, and oh yeah, is being used as backdoor gun control to outlaw the sale of all new semiautomatic pistols in the largest market in the nation.

Other than that, it’s great!

California is the first to bar retailers from selling new models of semiautomatic handguns not equipped to imprint the weapon’s make, model and serial number on the cartridge when a bullet is fired. While microstamping technology is popular with law enforcement to help deter or solve crime, manufacturers Smith & Wesson Holding Corp. (SWHC)and Sturm Ruger & Co. (RGR) say they won’t use it even if it means their guns can’t be sold in California.

In Sacramento, a federal judge may decide as soon as next week whether the state’s microstamping requirement, which took effect last year, constitutes a de facto ban that violates the right to bear arms. The ruling may spur appeals all the way to the U.S. Supreme Court, which in 2008 upheld individuals’ right to own handguns, calling them the “quintessential self-defense weapon.”

Bloomberg’s Edvard Pettersson has quite the active imagination, doesn’t he? Microstamping is not popular with law enforcement. They sought and received exemptions from it, just as they have with “smart guns” in the few states that have proposed that absurdity. As a matter of absolute fact, police officers are far more against new gun control laws than the rest of the citizenry, because they know that these laws do not work to stop crime. Further, it isn’t just a matter of gun manufacturer’s not wanting to use this non-viable technology; it simply does not exist in a viable commercial capability. California may as well have passed a bill mandating the use of yetis and unicorns.

U.S. District Judge Kimberly J. Mueller is hearing the case. Mueller worked as a Democrat before becoming a judge, and we can only hope that the phrases “compassionate” and “caring” in a glowing biography of her aren’t simply California code for knee-jerk liberal.

Expect this to end poorly for California gun owners this time around, and for the plaintiffs to appeal the case upward as fast as possible.